What kind of pickup is on John's Gibson ES-125 Guitar?


What's the Story Behind John's 'A Special Life' Guitar? 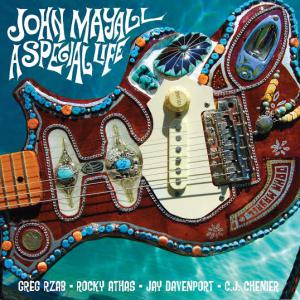 What Information do you Have About Former Bandmates Freddie Robinson, Jon Mark, and Johnny Almond?

We got lots of queries about Freddie Robinson. In 2001, we had a fan chime in who had tracked him down. Unfortunately, Freddie passed away in 2009. You can read his obituary here.


What kind of harp is John playing on "Room To Move"?


Where Can I Find CD Reissues of Old LP's?

In February 2009 Cherry Red Records released the albums Moving On, Ten Years Are Gone, and The Latest Edition on CD, complete with the original artwork and album notes. They can be ordered here or via Amazon.com.


Where Can I Find Out of Print Vinyl and Collectibles?

We get many letters asking for where to buy old and out of print recordings. If your local used record store is sorely insufficient, we feel the best bet is to do a search and keep tabs on the John Mayall section at www.ebay.com. You can sign up for "save this search" and be emailed when new items come up for sale. We are not responsible for anything that is for sale there, however, so shop carefully. There are thousands of bootleg CD's, videos and collectibles in this world. Check out the seller and ask specific questions. When in doubt, feel free to ask us if something is for real or not! There were hundreds of John Mayall items available here the last time we checked. Don't get burned, though!